A Taste of Wesley

As a football player, Bill learned the game from such legendary masters as Bobby Dodd, Vince Lombardi, and Don Shula. He snapped the ball to a who's who list of quarterbacks, including Bart Starr and Johnny Unitas.  He was a two-time Pro Bowl center and a three-time NFL Champion, including victories in Super Bowls I and V.  As a coach, Bill restored the Georgia Tech Yellow Jackets to national prominence as their head football coach in the 1980’s.  He went on to coach at Alabama, Kentucky, and Georgia State.  Coach Curry has been an analyst and on-air personality for ESPN, he’s a two-time author, husband for over 50 years to his wife Carolyn, and he’s a father and a grandfather.
Coach Curry is a member of Peachtree Road UMC and lives his life as a disciple of Jesus Christ.  Bill understands the importance of higher education ministry in the formation of students during their time at GA Tech as young adults and supports the ministry of Tech Wesley.
Pete Wellborn, Bill's former player, describes Bill as follows:
"Most importantly, as a human being, Bill has touched countless lives. To the thousands of athletes whom he has coached, Bill has been a mentor, advisor, father-figure, role model, philanthropist, and, in short, pretty much every other descriptive term one can think of that describes a person who improves and enriches the lives of everyone he touches.
In short, to be around Bill is to become a better person."
Sue Haupert-Johnson

Bishop of the North Georgia Conference of the United Methodist Church

Sue Haupert-Johnson was elected Bishop by the 2016 Southeastern Jurisdictional Conference of The United Methodist Church and consecrated July 15, 2016. She currently serves as Bishop of the North Georgia conference.  A Florida native, Bishop Haupert-Johnson (or “Bishop Sue”) is a graduate of the University of Florida (B.S. in Business Administration), University of Florida College of Law (J.D.), and Candler School of Theology at Emory University (M.Div.).
After being ordained a deacon in 1996 and an elder in 1998, she served in a number of pastoral appointments in the Florida Annual Conference. Becoming a District Superintendent in 2013, she guided a diverse area of very large and very small churches, urban, suburban, and rural churches; African-American, Haitian, and Hispanic churches; a Native American ministry; a large camp and retreat center, and a vibrant campus ministry. She was the “missional strategist” for this region, equipping and resourcing churches for ministry and helping them work together to reach their mission fields for Jesus Christ.
She currently serves on the General Board of Global Ministries Board of Directors, Clark Atlanta University Board of Trustees, Reinhardt University Board of Trustees, as the chair of the Board of Advisors of Candler School of Theology at Emory University and several others.
Bishop Haupert-Johnson is married to Rev. Allen Johnson. They have a daughter, Samantha.
Andy Thomas

Andy received a B.S. in Building Construction from the Georgia Institute of Technology in 1984 and then an M.B.A. from the University of Pennsylvania's Wharton School.  He was a regular attendee of the Wesley Foundation at Georgia Tech during his four years at Georgia Tech.  Andy was on the Board of Directors for a 20-year period where he also chaired the board for several years.  After a few years off the board, he is now back on the current Board of Directors for Tech Wesley.  His love runs deep for Jesus Christ, the Tech Wesley organization and its ministry to the students of Georgia Tech.   Andy and his wife Kathleen worship at Peachtree Road UMC and he has two adult children, Sarah and Michael. 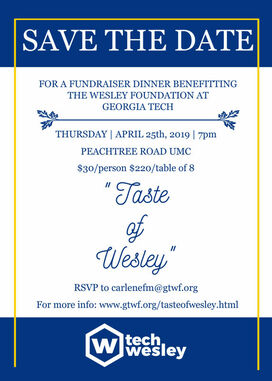